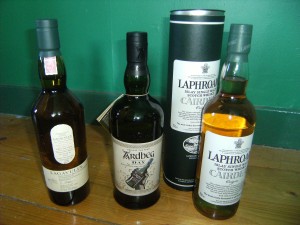 Gold, amber, copper, silk, velvet ..
some of the words heard frequently at the Islay and Jura Whisky Festival ~ eight days, nine malt whisky distilleries, dozens of drams.
The Isle of Islay, off the West coast of Scotland, during the last week of May every year, is the place to be.
The Feis Ile agus Diura began as a celebration of the music and malts of the islands, and quickly became appropriated by the distilleries as their week. Each distillery hosts an open day. Visitors participate in whisky master classes, food and whisky pairings, barbecues, boat trips, and talks and tastings by blenders, managers and warehouse keepers. Music; local and otherwise, is played through out the day and nights, and dozens of delicious malt whisky expressions are sampled, analysed, discussed and enjoyed. 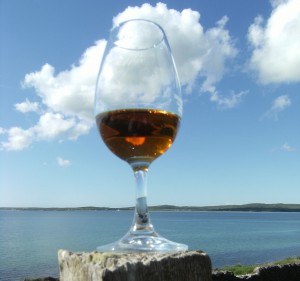 Many visitors return year after year. Friends are made with people from other countries, with people from Islay, distillery workers are greeted like long lost relatives. Visitors feel a sense of belonging to their favourite distillery. There are clubs the guests can join. One of the distilleries gives club members a square foot of distillery land. Visitors build miniature wooden houses, and plant trees and flags, on their squares.
This year the sunshine pouring from the sky matched the liquid sunshine poured into the countless glasses held by visitors from Germany, Holland, America, New Zealand, to name but a few.
Islay has a population of around four thousand, Jura has a population of around one hundred and twenty. During festival week these figures more than treble, and unless you have booked accommodation well in advance, youll not get a bed for love nor money. 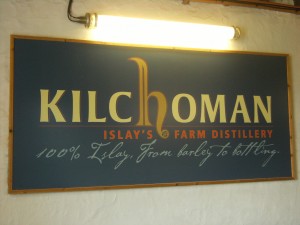 Islay is called The Queen of the Hebrides, she is also named The Whisky Isle. Islay is a bewitching, fertile island, the most southern of the Westen Isles, being found twenty two nautical miles from Ireland. Her seven established distilleries hug the sometimes rugged coastline, and, Kilchoman, the new built farm distillery is about a mile inland. In Islay, at any given time, it is impossible to be further than a handful of miles from the sea.
The neighbouring island of Jura is rugged, with the western side of the island being beautifully uninhabited. Jura has her distillery in the village of Craighouse, where one will also find the village shop, post office and hotel.
Ileachs (collective noun Ilich) ~ people from Islay, say that the only inhospitable thing about Jura is the midges ~ one Islay girl is quoted as saying: the midges in Jura wear tackety boots!
Jura whisky has a style of its own, being distinctly different from the characteristically more peated Islays. The generic brand, Islay Malt Whisky, is famous the world over. Whisky lovers and enthusiast flock to the islands each year to purchase the limited edition Festival Bottles. People even queue over night to ensure a purchase. Locals are bemused and amused by the enthusiasts, and in measure respectful and scornful of the avid collectors who appear sometimes to have more money than sense.
The whisky is old, new, fresh, fruity, peaty, golden and plentiful. Anyone who says they dont like whisky hasnt yet found their dram.
In the past, whisky could be rough, coarse, and perceived as a mans drink. Now, it is sophisticated, classy, complex, and a sensate experience enjoyed in equal measure by both sexes. Indeed, one Islay distillery boasts that they produce, The worlds sexiest whisky!
The week of the Islay and Jura Whisky Festival is an occasion to immerse oneself in malt ~ literally. The air around one smells of vanilla, spice, peat smoke, fruitcake. The liquid one drinks is velvet smooth with a short finish, dry with an amazing complexity, strong, light, soft and as varied and different as the dozens of people around you sharing the experience.
Some people call this liquid and this experience:
Malt Whisky.
The Ilich have a better name for it ~
they call it the Water of Life ~ they call it Uisge Beatha. 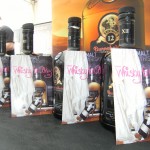 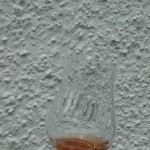 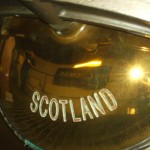