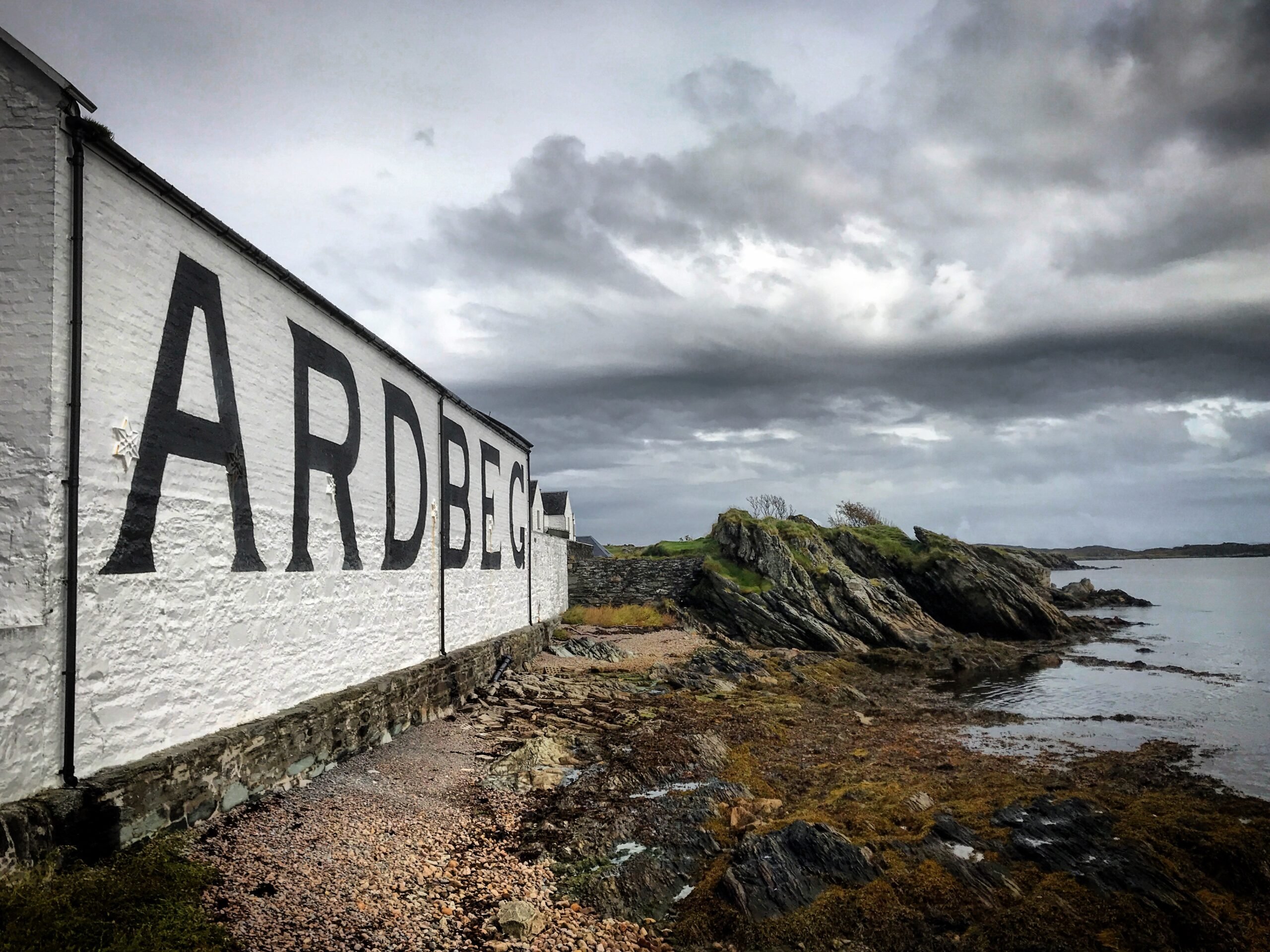 Ardbeg is a single malt whisky distillery on the south coast of Islay. It lies approximately four miles from the village of Port Ellen, along the same stretch of road that houses Lagavulin and Laphroaig.

Distillation has taken place on the site since the late 18th century but the official distillery wasn’t licensed until 1815. Today, it is owned and operated by Louis Vuitton Moet Hennessy (LVMH).

The distillery produces a full-bodied, smoky spirit with a coastal and often medicinal character. Core range expressions are bottled at 46% abv with no chill filtering or artificial colouring.

Ardbeg used its own floor maltings until expansion in the late 1970s meant it could no longer keep up with demand. Nowadays, the distillery’s full requirement comes from Port Ellen Maltings. The malt is peated to around 55 phenol parts per million (ppm).

A plentiful supply of soft, peaty water comes from Loch Arinambeist and Loch Uigeadail, three miles from the distillery.

Long fermentation, typically around 60 – 70 hours, creates lots of fruity flavours in the wash and quirks in the distillation process help to preserve and enhance those characterstics.

The distillery has four pot stills. The wash stills are capable of holding 18,000 litres while the spirit stills have a capacity of 17,000 litres. Tall necks and slightly ascending lyne arms help to encourage reflux, creating a purer spirit. In addition, the lyne arms of the spirit stills are fitted with purifiers. These small pipes filter some of the heavier vapours back into the pot to be distilled again.

Most of the spirit produced at Ardbeg is filled into ex-bourbon casks. However, sherry butts and French oak also feature, as well as various other casks that have been used for special edition bottlings.

In 1798, Duncan McDougall rented the farm of Ardbeg. It seems likely that some form of distillation was taking place as part of the every day running of the farm but it wasn’t until 1815 that Duncan’s son, John, encouraged by the local landowner, established an official distillery.

The distillery remained in the McDougall family until 1838 when it was bought by Thomas Buchanan, a Glasgow spirit merchant. Despite the new owner, however, Ardbeg continued to be run on a day-to-day basis by Alexander McDougall.

When Alexander passed away in 1853, the running of the distillery was taken on by his sisters, Margaret and Flora, working with Colin Hay.

In 1887, journalist Alfred Barnard visited Ardbeg and found Hay at the helm of the largest whisky producer on Islay. At that time the distillery was churning out around 250,000 gallons (1.1 million litres).

Ardbeg returned to McDougall ownership in 1922 when Alexander McDougall & Co acquired the business. It would remain as such until the 1970s when a takeover by Hiram Walker ended almost 180 years of McDougall involvement.

Hiram Walker was an entrepreneur and the founder of Hiram Walker & Sons in Windsor, Ontario. His involvement in the whisky industry began as a grocer, before progressing to distilling in his own right.

The timing of the Hiram Walker takeover was unfortunate. The late 70s and early 80s saw a dip in whisky sales. Across the Scotch industry, distillers failed to predict the crash and many were saddled with a dramatic excess of stocks. The situation became known as the Whisky Loch and the result was the closure of several Scottish distilleries.

Production at Ardbeg ground to a halt in 1981 and despite Allied Lyons taking over in 1987, the site remained largely dormant and soon fell into disrepair.

Ardbeg lay silent until an unlikely saviour in the form of Glenmorangie plc appeared on the horizon. The mothballed Islay distillery was purchased for £7 million.

Serving as Glenmorangie Distillery Manager at that time was Dr Bill Lumsden. In 1998, he was made Head of Distilling and Whisky Creation for both Glenmorangie and Ardbeg. As such, he has played a key role in the shaping of Ardbeg from its rebirth until the present day.

Glenmorangie oversaw an impressive turnaround in the distillery’s fortunes. Full-time production returned within a year and the first single malt bottlings were soon on the shelves. The Visitor Centre and Old Kiln Cafe welcomed 3,5000 visitors in the first year of business.

Under Dr Bill’s guidance, some of the warehouse stocks were re-racked into better casks whilst early releases of spirit gave a tantalising glimpse of what was to come. With names like Ardbeg Very Young, Still Young and Almost There the new owners built up to the release of the Ardbeg Ten Year Old in 2000. That single malt remains the distillery’s flagship expression today, more than 20 years later.

Lumsden’s love of innovation has led to a lot of experimentation at Ardbeg, particularly evident in the Committee Releases. Whether it be casks with an Alligator char, excessively long fermentation times or dark roasted malt, there seems to be no end to the creative options being explored at Ardbeg.

2015 saw the distillery celebrate its 200th anniversary and in 2018, the site doubled production capacity with the launch of a newly constructed still house. It is thanks to the 1990s Glenmorangie takeover (Glenmorangie is now part of LVMH) and the guidance of Dr Bill Lumsden, that the future of this once-endangered distillery looks to be in excellent shape. 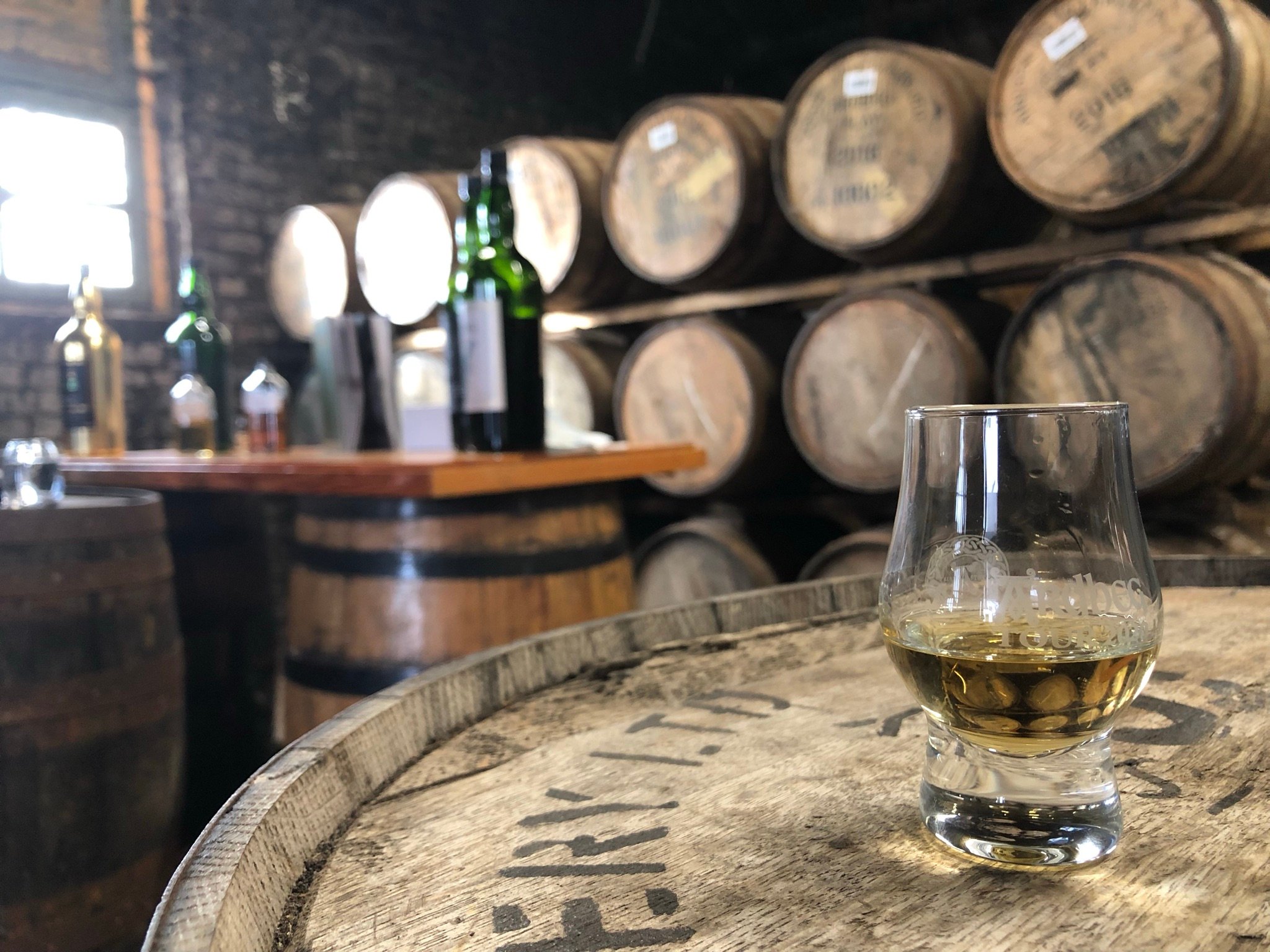 In Alfred Barnard’s “Whisky Distilleries of the United Kingdom” the author speaks of the generosity of the McDougalls of Ardbeg. According to Barnard, Alexander McDougall, upon learning that an “unknown namesake” had been found guilty in court and ordered to pay a fine or face imprisonment, demanded to pay the fine himself as “it was impossible that a McDougall could have done anything wrong”.

That spirit of kinship and loyalty seemed to remain at the distillery after Alexander’s death. The Highland News of Saturday, January 29 1898 reported as follows: “Port Ellen – Messrs Alexander Macdougall & Co., Ardbeg Distillery, with their accustomed liberality at this season of the year, distributed a supply of coals last week to about eighty poor persons resident in the village.” A fine demonstration of the central role distilleries played in community life.