Laphroaig distillery is in the south of Islay on the Kildalton coast, a short distance from Port Ellen. The name comes from the Gaelic Lag Bhrodhaig meaning the hollow of the broad bay. The distillery is owned and operated by Beam Suntory, part of Japan’s Suntory Holdings.

Laphroaig labels itself “the most richly flavoured of all Scotch whiskies” and it’s easy to see why. The heavily peated spirit carries a distinctive medicinal aroma that’s unmatched anywhere in the world.

Laphroaig is one of only a few distilleries to retain its malting floor. The importance of in-house floor malting is often debated but the team at Laphroaig feel the malting floor and in particular, the distillery kiln, adds some unique character to the spirit.

Water from the Kilbride Dam is used to mash the barley, to bring down the spirit’s strength when it comes off the still and to reduce the whisky before it’s bottled. The highly acidic water arises in quartzite hills and flows over peat. Mineral content in the water is low because it moves predominantly by surface flow and makes little contact with the rocks below.

Laphroaig cuts peat at Glenmachrie. The peat is dried for three months before becoming fuel for the kiln. The unique makeup of Islay peat, consisting mainly of heather, lichen and moss, is responsible for the medicinal smoky note that comes through in many of the island’s whiskies. Laphroaig barley is peated before drying as the cold smoking process helps the damp grain to better absorb the smoky flavours. After 17 hours of smoking, the barley is dried using hot air.

The grains are milled and mashed to create a clear wort, full of fruity flavours, before transferring to one of the distillery’s washbacks. Distiller’s yeast is added and the natural sugars are turned into alcohol. The fermentation process lasts a minimum of 55 hours. Afterwards, the wort has become a beer (or wash) of around 8.5% abv.

The still-house has seven copper stills: three large wash stills and four smaller spirit stills. The first run produces a low wine of around 22% abv. During the second distillation, the distiller makes a late cut to the heart of the run, allowing more of the medicinal, peaty notes to come through.

New Make Spirit is diluted to 63.5% before being filled into oak casks. Almost all of Laphroaig’s whiskies are either wholly or partially matured in ex-bourbon casks. However, ex-sherry casks are sometimes used to provide additional layers of flavour. 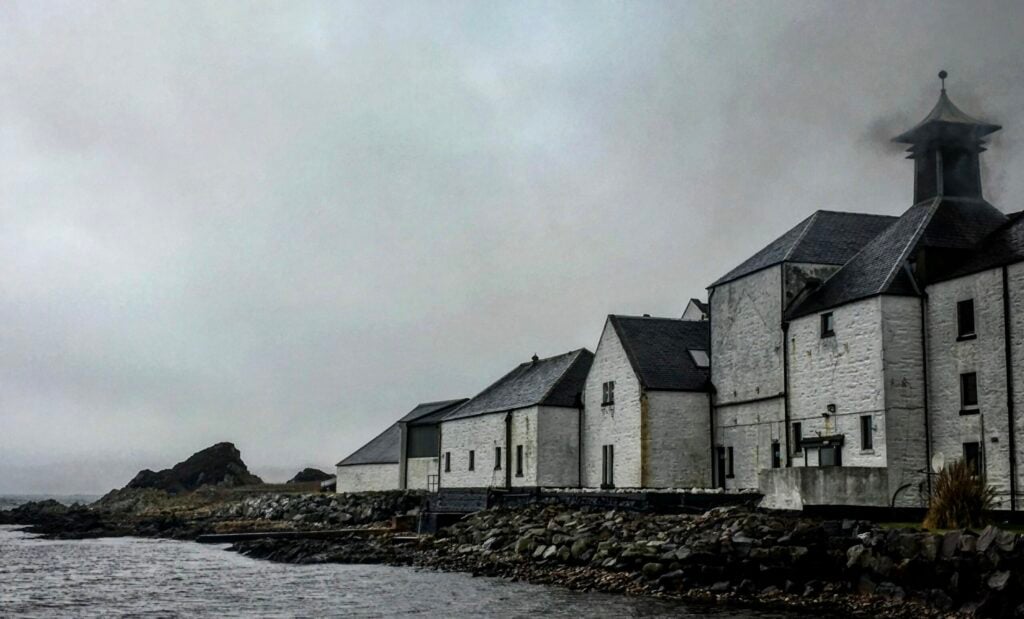 Laphroaig was established in 1815 by Donald and Alexander Johnston. The Johnston family anglicised their name from McCabe to hide their association with Clan Donald in the wake of the failed Jacobite uprising. Ironically, the two brothers created their Islay distillery with the help of the local laird, a Campbell, no less. Walter Frederick Campbell had a dramatic effect on Islay. Building the villages of Port Ellen, Port Charlotte and Port Wemyss. He also encouraged the island’s fledgling distilling industry and supported the Johnstons at Laphroaig.

The distillery stayed in the Johnston family into the 20th century. Ian Hunter, nephew of Sandy Johnston, ended the family line when he passed away without heir in 1954. Hunter left the running of Laphroaig to his most trusted ally, Bessie Williamson.

Elizabeth Leitch Williamson was born in 1910. She attended Glasgow University from 1927, where she studied to become a teacher. In 1934, Williamson took a summer job as a shorthand typist at Laphroaig, where she worked closely with Ian Hunter. Though originally intending to stay for a few months, Bessie soon made the island her home and eventually became the distillery’s office manager.

When Ian Hunter suffered a stroke in 1938, Williamson took on greater responsibility at the distillery. By the end of the Second World War, she was the full-time manager of the distillery. When Hunter passed away in 1954, Bessie inherited his controlling interest.

Under Bessie Williamson’s guidance, Laphroaig thrived. She was among the first to pioneer the shift towards single malt bottlings and significantly boosted the brand’s reputation in America. Despite selling her shares in the distillery, Bessie continued as Managing Director until her retirement in 1972. She passed away in Glasgow on 26 May 1982.

Through a series of mergers, Laphroaig became part of Beam Inc and then Beam Suntory in 2014. Running the distillery at that time was John Campbell, the first Ileach to serve as Distillery Manager.

John Campbell started work in the Laphroaig warehouses in 1994 and spent the next 27 years at the distillery. During his time, John oversaw the growth of the Friends of Laphroaig project, the development of online sales and witnessed the explosion in distillery tourism. He oversaw the running of the distillery on a day-to-day basis and ensured the staff had everything they needed to produce the best possible whisky. He also gave his expertise to the creation of new whiskies, not least the Cask Strength Cairdeas bottlings. For a generation of whisky lovers, John Campbell was the face of Laphroaig, spreading the word of Islay across the globe.

Campbell retired from Laphroaig in 2021, leaving as the longest serving distillery manager in the distillery’s history. He now serves as Production Director at Lochlea Distillery on the Scottish mainland.

Who’s on the dramming?

Back in the 1960s, it was commonplace for distillery workers to be given a wee dram in the course of their daily tasks. The drams were distributed by the excisemen of HMRC but some were more generous than others. The men could set their expectations in advance if they knew who was on the dramming on any given day.

On the morning of 21st July 1969, three Ileachs were making their way to their shift at Laphroaig. The previous evening, they had watched in astonishment as Buzz Aldrin and Neil Armstong became the first people to walk on the moon.

Two of the men, like the rest of the world, were amazed by this achievement and were excitedly discussing its ramifications when the third man interrupted them with somewhat more pressing concerns…

“Never mind that moon talk… WHO’S ON THE DRAMMING???”