Too much whisky, too many people….. Can’t wait for next year?!

Avarice has created a monster. The infrastructure of Islay is stetched to breaking.

The week of the feis now turns Islay into Ibiza. It’s a whisky club scene….

More and more outside agencies are jumping on the band wagon. People who profess to be in the industry have no clue about the nature or the history of Feisle. I told one guy that the festival committee was a voluntary organisation. ‘And what do they do?’, he asked!

Yes, we meet friends, yes we have fun… but we do this on other weeks too.

The Islay roads are falling to bits, we have bin collections every 3 weeks or so. People have to pay for themselves to get to hospital in the mainland ~ by boat!

Who actually makes money from Feisle?

Lagavulin Distillery (Diageo) brought in 750,000 on their festival bottle ALONE.

Even if the festival was not on, visitors would still come. So, the beds would be filled, the tables would be sat at…..

I like when people buy festival bottles and put them on German ebay ~ why should Josephine Blogs not make a bob or two on her festival bottle? Why should all the money go to big companies?

Yes, I know people can argue about the money the craft people, the taxi drivers, etc etc. make during the week. I know all these things…. it’s just once anything becomes so commercialised it becomes dehumanised and out of control.

The Festival Committee host Events to maintain the Islay hospitality and intrinsic nature of the week. There are so many external Events, that we are now seeing a division as at the Edinburgh Festival … where the Feis fringe is overtaking the Feis itself: which would be fine, if we were not an island with a limited physicality ~ and it’s not all meant to be about money.

One lady in Bowmore was sitting having her lunch in her garden, when flying over the wall, came dog waste thrown by two people in a camper van parked outside her gate for days!!!

Where do we go from here…?

Maybe the Feis will be likeDaisy World.Once it reaches absolute saturation (this year?) it will collapse and rebuild itself in another way.

Maybe we should discuss having TWO Feis weeks. One in May and one in October, say?

I am not in favour of having a two week long Feis. It is fine for those who come and go, and whilst on Islay are on holiday. It would probably be too much for the Ilich (the Islay people) to cope with. But this is obviously open for discussion.

Anyway…. even with all the above,

I love seeing everyone, I love Feis Ile, I love whisky & music

and, everybody is somebody’s friend, 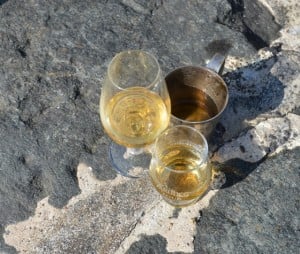