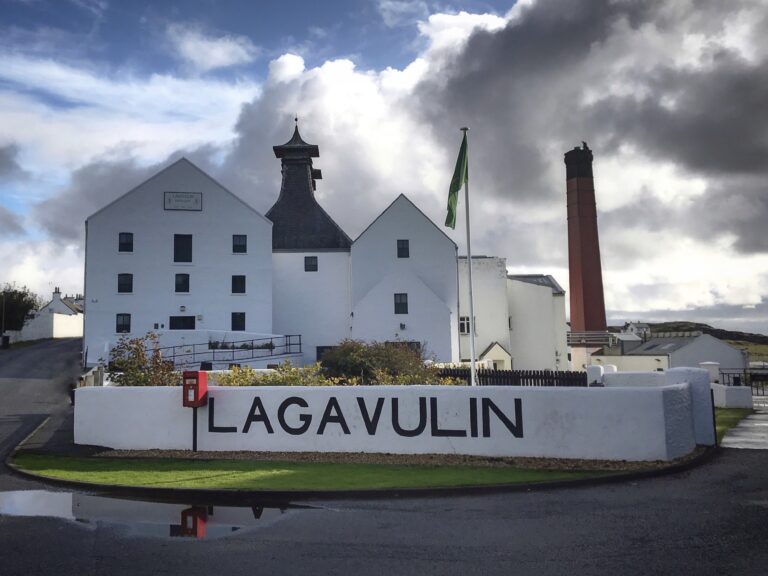 Georgette Crawford is small, contained, organised, controlled, competent; and in charge!
She is 34 years old and the manager at Lagavulin Distillery in Islay. As part of my Whisky for Girls venture, I spoke with Georgie, on Tuesday 31 January.

Georgie gave me two hours of her time, during which she talked me through her role at the distillery, Diageo as a company, four different whiskies and developing my whisky-tasting abilities. During our talk, workers on shift called into the office and quickly discussed with Georgie; the quality of the yeast, to remember CAD (a bit random, I know!) and numerous other things. The way they interacted with each other made me know that they had an easy, yet respectful relationship.

I asked Georgie how it all began ~ did she have a career plan?

The answer was no. It all happened organically. Georgie ran a bar in Edinburgh not long after leaving school and found she could talk a good whisky. She got a job with the Scotch Malt Whisky Society about 10 years ago and her career developed from there. Georgie ran a bar, then a whisky retail outlet, and was the manager at the reception centre in Talisker in Skye before she came back to Lagavulin.

She has a huge work ethic, and that, coupled with the geographical chance of being from Islay stood her in good stead in the industry. Whisky and the distilleries were there in the background when she was growing up. Whisky is part of life in Islay. It is ingrained in us. Whisky talk and distillery talk are commonplace language to us. The first person she told when she got the job at Lagavulin was her Dad. She says it’s a dream job ~ and she can’t complain about the salary – it’s enough to keep her Westie in dog biscuits!

Georgie says she is driven by the people she works with at Lagavulin. They are a team. She encourages a strong sense of the shared goal. Everything that has to be done becomes easy to achieve with everyone working together. The first thing she does in the morning is to go down to the control room, see the guys and find out what’s doing. There are 21 shifts a week, and Georgie is in for 5 of them. For the remaining 16 shifts the guys are the manager.

Lagavulin Distillery is owned by Diageo, a global business. They have a huge, ever-expanding market and want a constant, quality product to sell. Georgie and the team at Lagavulin endeavour to produce NMS – New Make Spirit – to this end. It is in the styles of maturation that a range of products is created. The use of different casks and the blending of different spirits together. The heart of the distillery’s range is the Lagavulin 16-year-old.

Georgie likes being part of an industry that deals with leisure time. Whisky is drunk at times of celebration and importance. It is drunk at christenings, weddings and funerals. People drink it when they are relaxing and with friends. Malt whisky has a very positive image for people.

Georgie reckons that the secret of a good dram is having the time to appreciate it. She told me she heard that Johnny Depp doesn’t drink much anymore but will sometimes order a Lagavulin just to smell it!

I asked Georgie whom she admires in the business. It has to be Maureen Robinson, Master Blender ~ how someone can put these flavours together to create what she does is just amazing.

I asked what skills, attributes and qualifications Georgie regarded as important for achieving in this industry. She said; ~ being organised, having a passion for learning, and never being afraid to ask if you don’t know something.

She told me that Diageo operates graduate schemes, which run for three years and offers the experience of six different managerial roles within the industry. There is also the chance to work abroad whilst learning.

I asked Georgie what advice she would give to Whisky for Girls, and the answer was ~ Enjoy it. Smile, laugh and enjoy. A simple-sounding piece of advice that sometimes gets forgotten.

At the end of the interview, I asked Georgie if we could have our photograph taken together. I said, where will we stand?
‘we’ll stand in front of the whisky wall with all the bottles, she replied, thinking immediately of the optimum opportunity for her product, even in the most casual of situations.

Georgie asked Rosie, the secretary to take the picture. Rosie was nervous about taking the photo. I stood against the wall, Georgie focused the camera, gave it to Rosie and said just stand where I was and press the button then she joined me for the picture. All the while she was laughing and joking.

I thought; that’s how she does it, she smoothly engineers situations to the advantage of all concerned ~ Rosie did a good job, I got my photo, and Lagavulin got an advert.

No wonder Georgette Crawford is the manager of one of the great Islay Malt Whisky Distilleries at the tender age of 34 years ~ Like Lagavulin 16 years old, she is as constant as the Northern Star.