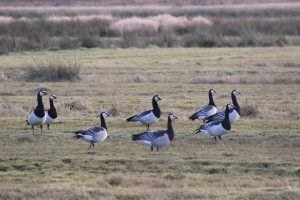 Away back in the day, when it wasn’t illegal to shoot geese, if you were caught drunk driving you were sent home to bed, and many island people drove around with a gun in their vehicle, two gentlemen from Port Ellen had been out sampling a touch of the hard stuff.

These were also the days when there was ongoing ‘conflict’ with the exciseman. Or to use an older word; the ‘gauger’.
The exciseman was called the ‘gauger’ because even further back in the day, he used to gauge the strength of the spirit. This was done with glass balls and would, I suppose, have been along the lines of Galileo’s Thermometer.
Anyway, back to the story.

Two men from Port Ellen had been collecting their own entitlement of spirit from one of the warehouses. And for reasons best known to themselves, they decided to drive to Portnahaven or somewhere past Bowmore.
But, even as they had been busy at securing the spirit to which they saw themselves entitled, they were also well aware that not everyone upheld their view that spirit is ours.

Some people see it as a benefit to the crown, and the exciseman by dint of his job is obviously one of them. The two men from Port Ellen weren’t particularly keen on an encounter with the excise ~due to the fact that they were both in great form and couldn’t think of anything worse than not being friendly and sharing. They couldn’t be bothered having to assert their moral and philosophical position to someone who wasn’t on the same wavelength.

So, with a car full of drink, and also being full of drink themselves, they drove out of Bowmore on the way around Loch Indaal. At the head of the loch was a field full of geese. What better to eat with a dram than a lovely roast goose?
Neil slowed the car, Donald stuck the gun, which had been lying fully loaded across the back seat as usual, out the passenger window and took a careful bead on a goose ~ FIRED!

Just as he did……….. the exciseman drove around the corner towards them! As he drove past Neil and Donald in their car with the gun sticking out the window, his eyes were big and round as saucers. Taking in the scene, the exciseman raised his hand, and in time-honoured fashion tapped his temple with a finger, then, making a circling motion, demonstrated visually that he thought Neil and Donald were round the twist!

‘What’s he saying? What’s he saying?’ Donald agitatedly yelled to Neil, as their car careered erratically past the exciseman.
‘It’s fine, Neil said laconically, ‘ Don’t worry, he’s saying, he thinks you shot it in the head!’